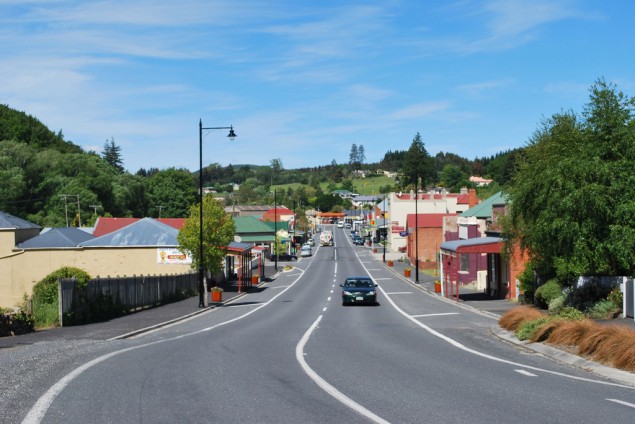 Lawrence is always abuzz. When passing through, you feel the urge to stop and enjoy the colour – whether you’re grabbing a coffee, browsing in the shops or pausing to stretch your legs.

Lawrence is 92 kilometres south west of Dunedin on State Highway 8 to Alexandra and beyond to Queenstown. It sits close to the Tuapeka River, among typical Clutha hill country, and is home to 400 people – a long way off its peak population of 11,500 in the 1860s. At the time, the discovery of gold in Gabriel’s Gully saw the township’s population grow to double that of Dunedin.

Insights from a local

Dale from the Lawrence Information Centre moved to the township five years ago, after 30 years in the capital. She took a road trip with a friend and settled on Lawrence, charmed by its vibrancy and swayed by its character houses and their affordability.

“I’m happy as a sand boy here. It was a big change, but you can be as involved or uninvolved as you want to be.”

Dale especially loves the distinct seasons. She also enjoys the proactive community. “If people want anything done, they’ll do it themselves.”

No shortage of activity

Lawrence is the start of the Clutha Gold Trail – a relatively new 73-kilometre cycle and walking trail that heads up the Clutha Mata-au River to Lake Roxburgh, where it joins up with the Roxburgh Gorge Trail.

Dale believes the trail holds huge potential for future business, especially if long-term plans to link the trails up with Middlemarch, via Waihola, come to fruition and create a complete loop.

There is no shortage of sporting activity in the district, with the Lawrence Rugby Football Club providing a focal point. There is also the brand new covered Lawrence Swimming Pool and the Simpson Park sporting complex.

With the Tuapeka and Clutha Mata-au Rivers nearby, fishing is a popular pastime, while the forestry provides a wonderful hunting ground.

The Lawrence Area School delivers education all the way through – from Years 1 to 13 – with a roll of about 140 students.

There is a GP and medical centre, which includes a residential wing and allows respite care.

Local schoolteacher John J. Woods composed the music for the national anthem in Lawrence in 1876, although it was 1977 before it became the official anthem.

The first bicycle constructed in New Zealand was made in Lawrence in 1893, by a local blacksmith apprentice Patrick O’Leary. Endearingly, he had to make the necessary tools first.

Lawrence is also famous for being the town where two lions escaped from a circus in 1978, eventually being shot by police. The pair now reside – albeit stuffed – in the top story of the Otago Museum in Dunedin.